Some of the biggest acts in the world, including Pearl Jam, Post Malone, Kendrick Lamar, Camila Cabello, The Killers, Ellie Goulding and Zara Larsson, as well as exciting new stars and local heroes are all part of the package at Lollapalooza Stockholm this summer. The world-renowned international music festival takes place at beautiful Gärdet June 26th – 28th. Tickets are available now and to an Early Bird price. Get them while you can before the price goes up!

Lollapalooza Stockholm 2020 are stoked to present one of the most impressive line-ups in Sweden ever. Iconic rock band Pearl Jam are now where they’ve always belonged, in the Rock and Roll Hall of Fame. These Seattle pioneers also belong at the Tower Stage, where they’ll be the final attraction on Saturday June 27th. An unstoppable roll of success gives us Post Malone, the most streamed artist globally in 2019 and whose latest album “Hollywood Bleeding” was the second most streamed album of the year. Posty, as the fans know him, will close the first day – Friday June 26th – at the Tower Stage. King Kendrick is one for the history books – not only one of the greatest rappers of all time, but also a Pulitzer Prize winner. Kendrick Lamar takes his unmatchable intensity and remarkable track record to the Tower Stage, where he’s the last act on the festival’s last day, Sunday June 28th. You all know massive hits such as ”Havana” (the most streamed song ever by a female artist) and ”Señorita” (the longest running #1 on the global charts on iTunes, Apple Music and Spotify), so we bet you don’t wanna miss it when one of the biggest artists in the world right now, Camila Cabello, brings a Caribbean breeze to the Bay Stage on Sunday June 28th. Las Vegas 4-piece rock band The Killers have seen all of their five albums reach the number one spot in the UK, and a sixth is expected next year. Brandon Flowers and the band is headlining the Bay Stage on Saturday June 27th. The stream of hits for Ellie Goulding never seem to run dry. When this British pop queen closes the Bay Stage on Friday June 26th, you’ll sure love her like you do. Stockholm’s very own pop sensation Zara Larsson has conquered the world with her voice, her moves, her songs. Zara will play on the Tower Stage on Friday June 26th!

Or some of the biggest and best Swedish artists? We have Snoh Aalegra, Timbuktu & Damn!, Miriam Bryant, Galantis, Fricky, Mando Diao, Sabina Ddumba, Jireel, Graveyard and Dimitri Vangelis & Wyman ready for you, just to name a few.

Early bird tickets are available for 2295 SEK (regular price 2695 SEK) – until the price goes up.

See you this summer! 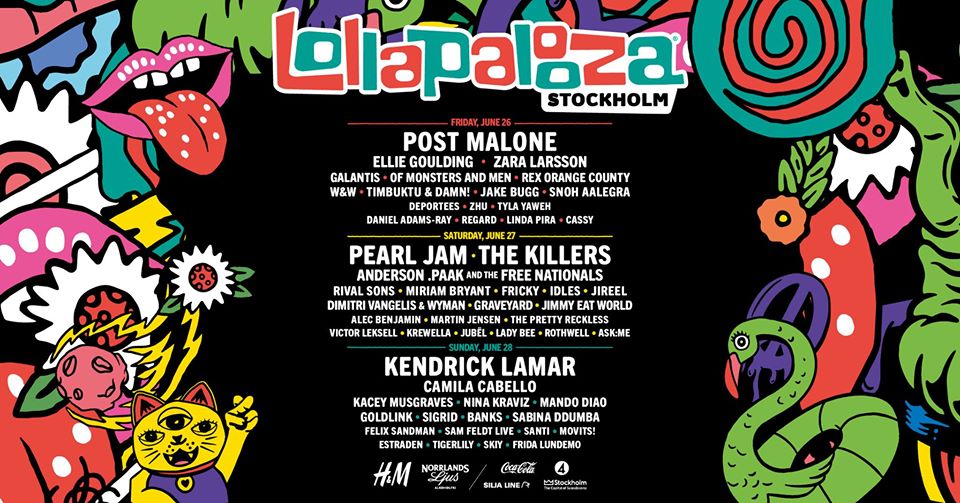